Skip to content
Announcing JA Moody is an Authorized Distributor for The Hellan Strainer Co. For a quote, please contact us.
Back to News

TOTS: The Greatest Butterfly Valve in the World

Learn About the Next Generation Vanessa Valve

A fire main system aboard any US Navy vessel distributes pressurized seawater for firefighting, auxiliary equipment cooling, dewatering, and washdown services.  The fire main is one of the most mission critical fluid distribution system aboard any Naval vessel.  It follows then, that the isolation valves in such a critical system would be designed to enable the crew’s ability to quickly isolate portions of the fire main after battle damage.  Emerson’s TOTS (triple offset torque seated) valve (Vanessa) does this very well.

The Vanessa valve is quarter turn with non-rubbing rotation and has a metal-to-metal seat.   Torque Seated means that the seating force is generated by externally applied torque rather than by mechanical interference.  Cone to cone sealing occurs by contact pressure and not by friction generated by the rubbing between the valve disc and seat.

The Vanessa valve has the double offset features of The Navy’s standard High- Performance Butterfly Valve (MIL-V-24624), but a third offset was created.  Offset 3 is where the seat and seal cone centerlines are inclined in respect to the pipe/valve centerline.  This third offset eliminates rubbing completely, yet still results in zero leakage.  (See the image below)

These features support a longer life expectancy, reduced maintenance requirements, and a lower cost of ownership compared to traditional gate, butterfly, and other valve designs.  In general, the Vanessa valve will usually fit perfectly into the space vacated by an older-style butterfly valve. 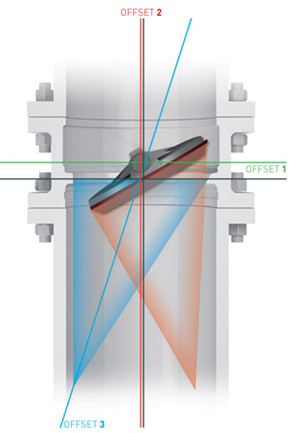 Vanessa valves are generally more expensive to manufacture so it makes good sense to make sure that the most important points of isolation for a fire main system should have the most effective and functional isolation valves.  Vanessa is the “Cadillac” of butterfly valves and functions extremely well in the harshest of environments.  Even with that, Emerson was still not satisfied.  The next variant of Vanessa includes a reinforced or hardened seat.  This is accomplished by using cold spray technology which takes small solid-state particles of INCONEL 624 and accelerates them to over 3,000 feet per second which creates a coating on the base material.  As a result of the cold spray, this Vanessa variant has a ½ millimeter thickness of material which provides a substantial increase in hardness and is more than a 2,000 percent improvement in resistance to erosion/corrosion.  The cold spray contributes greatly to extending the valve life while preserving it’s key features.

Every US Navy combatant ship depends on effective system isolation of the fire main for both maintenance and casualty control purposes.  The criticality of this is real.  With an inability to isolate the fire main system after battle damage, it is nearly impossible to stop the flooding without resorting to eliminating the fire main pressure throughout the ship.  What would have been the impact?  Flooded spaces, inability to fight fires after battle damage, and loss of cooling for auxiliary systems.  Would it have been a mission kill?  Most likely not thanks to the talent and training of the crew in casualty control which would have enabled them to correct the problem and restore fire main.  For a time, however, it would have degraded the readiness of one of the nation’s vessels.

The US Navy has pushed industry to continue to improve on butterfly valve performance in saltwater systems aboard ship, and Emerson/ Vanessa/ JA Moody have responded.  The triple offset torque seated (hardened seat) Vanessa variant represents the greatest high-performance butterfly valve in the world.

This next generation valve is available only through JA Moody.  The valve is available in sizes 3 inch through 12 inch.  For more information about lead time, pricing and availability please contact your technical sales representative at sales@jamoody.com or call us at 610-647-3810.